A couple weeks ago I was invited to check out Salata, a build-your-own salad restaurant in the Highland Park area. Never having eaten at Salata before, I expected something like Snappy Salads: better than Super Salad and Sweet Tomatoes, but nothing that would blow my little foodie skirt up.

Salata isn’t even in the same ballpark as those guys. This place is like the Eatzi’s salad bar on steriods.

Okay, maybe that’s a bit of an exhaggeration. But there are like four different kinds of lettuce, eight different kinds of meats, twenty-four cheeses, toppings and veggies, twelve dressings, six flavors of tortillas and at the end of the line? Slices of tempting-as-hell breads from Empire smeared with stuff like pesto and spicy chipotle shmear. You could make yourself a different kind of salad every day without repeats for like ever. In my estimation. See for yourself: 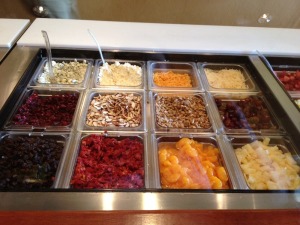 At Salata, it’s clear as you walk through the line that the focus is on quality, even though they clearly have quantity covered as well. Nothing they have on the line looks suspect, and trust me, my suspect-o-meter is FINELY tuned, especially when I’m coming up on someplace new. Chicken chunks were clearly chopped from chicken boobies, avocados were sitting there, whole and ripe, ready to be cut and tossed into my bowl of awesome. 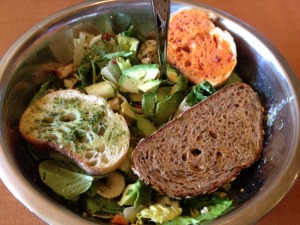 Here was my final creation. Now since my meal was comped, I loaded up with all three bread varieties (FOR RESEARCH PURPOSES) and avocado (my favorite fruit), which would normally represent an additional charge. But other than that, their pricing kinda rules. It’s $8 including tax, for a giant bowl of everything except protein, like chicken, which you’d pay $2 extra for. Seafood (YES, they have like serious salmon planks happening there) means $3 more. Wraps are even cheaper at $7, $8 and $9, respectively. So you can definitely walk out of there for under $10, full of high-quality salad deliciousness. That sounds like lunch to me! These are salads even a man could love. And that’s saying something. But I’m not a man or anything. Anyway, I’ll be back there soon.

Zoli’s New ...
I'll just come out and say it: Zoli's makes my ...
Foxtrot Market
What you'll find inside:Beer, wine, local food ...
Hero by HG Supply
Hero by HG is not small. In fact, nothing about ...

foodbitch on facebook
foodbitch on facebook: Be my friend. from ...
The 2018 Big Tex ...
It's 2018 Big Tex Choice Awards time, y'all! ...
This is me: a ...
This is me: a foodbitch x Pier 1 Collab When ...
CONTACT FOODBITCH
SLIDE INTO MY DMs:
Facebook Twitter Tumblr Instagram
ASK ME ANYTHING:
ask@foodbitch.me
ABOUT FOODBITCH
Foodbitch is an expert eater and published food writer who lives in Dallas, Texas with her exceptionally well-fed twin daughters, husband and their dogs. She’ll tell you what to eat and you’ll like it.
IMPORTANT LINKS